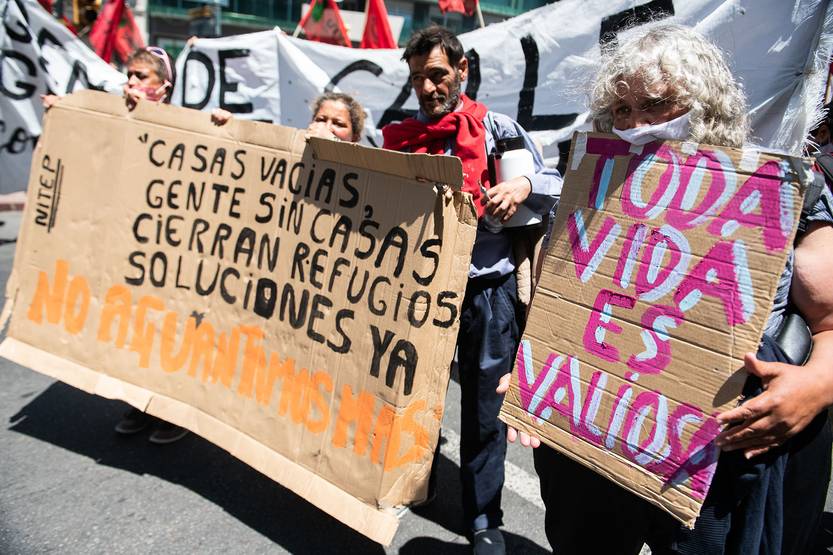 With a press conference in Liber Seregni square, the collective Ni Todo Está Perdido (Nitep) commemorated this Monday four years since its formation, and some members of the collective read a statement in which they reaffirmed their “three paths of fight”, which they defined as “an inescapable braid: housing, work and health”.

For Nitep, the social policies focused on the homeless population “precarious kids” and “they keep you dependent”. Likewise, they denounced that as a job opportunity they are offered “an alternative of six months for 5,000 pesos per month”, but that in this way “the only thing that is done is to keep poverty alive”; and if you get a job, you lose “staying in the shelter” as well as “you don’t have a dining room or the TUS [Uruguay Social Card].

The conference, in addition to coinciding with the anniversary of the collective, it occurred on the same date that the National Contingency Plan of the Ministry of Social Development (Mides), also known as the Winter Plan, was scheduled to end. However, at the conference Nitep spokespersons reported that they were told “unofficially” that the strategy would be extended for a while longer. As confirmed by Mides to la daily
, since for a time there is a will to have “a greater number of contingency quotas”.

In this way, Nitep intends to bring concrete proposals to the portfolio, such as “collective houses” with “several personalities living together, sharing expenses and daily activities, with economic and technical support”, as well as “houses oriented to groups of specific personalities: fool mothers, children, elderly personalities, chronic illnesses fool personalities”.

“Let’s also talk about health, a priority for a dignified life”, read the spokespersons for the collective, who understand that “the life circumstances that lead a person to be on the street cause health in all its definition to be put into risk”.

From the group they maintained that “work is the key to getting off the street”, so it is “very difficult to work in these conditions: without residence, without space to sleep peacefully”.

” For many years we have been denouncing various institutional violence present in the shelter system and hotels”, a set of “unanswered complaints similar to those that existed in the hotel Aramaya”, residence rented by the Mides that s and set fire on October 17, leaving as a result the death of a 35-year-old woman and several hospitalized children in a tomb state For this reason, from Nitep they recalled that “a over time” have made these complaints, related to “bad and risky conditions of the buildings, overcrowding and situations of abuse, pharmacological malpractice and practices of psychological abuse”.

According to Nitep, “there are no structural solutions to the street situation, nor the effective guarantee of fundamental rights, systematically violated.” Thus, these facts “show the precariousness of the solutions to the violated personalities: they tie with wire”.

” The lack of airplanes, of effective accommodations, the permanent transitory all the proposals that the pertinent authorities test”, with the clarification that they were not “criticizing the current authorities, but that this comes from years ago”, they sentenced.